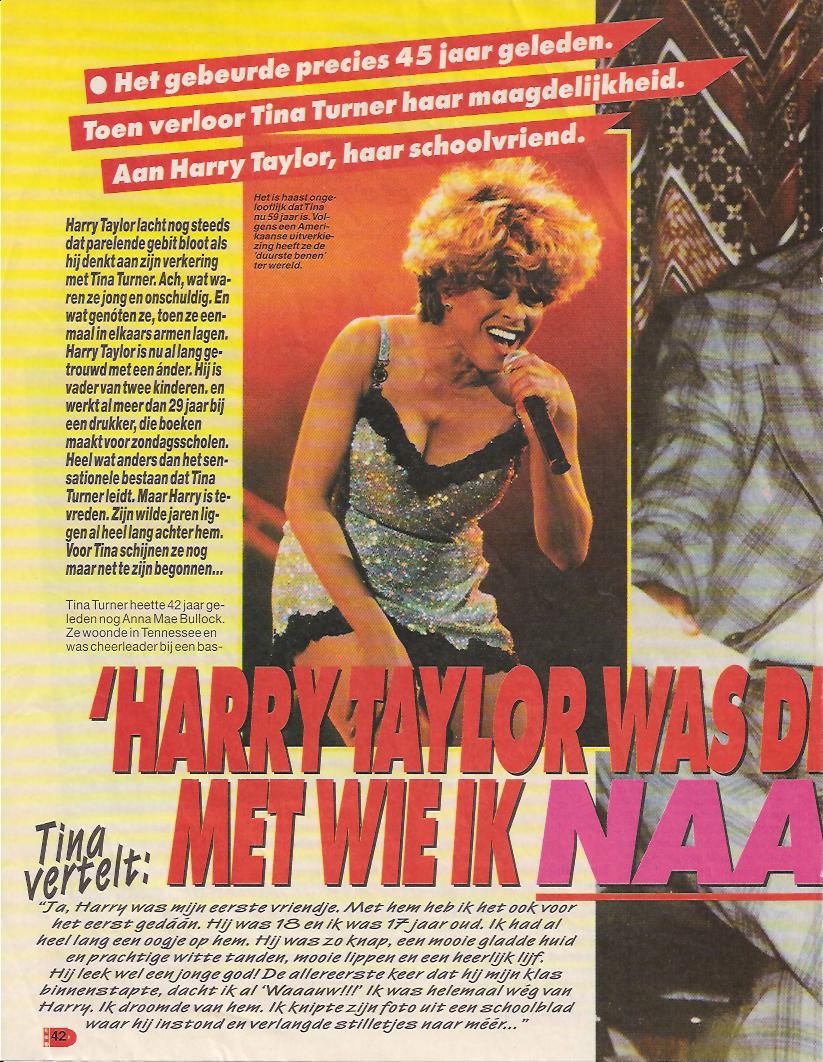 Tina Turner mentions her first love Harry Taylor in her 1986 autobiography ‘I, Tina’. The book shows photos from his high school years, but more rare are these photos of Tina and Harry together during a high school reunion in the mid-1970’s. These photos and article appeared in the 1990’s in Dutch magazine ‘Top 10’, and maybe in other publications internationally.

For the translated text of the article, and Tina talking about her first love in a 2005 interview in ‘O’ magazine, read below!

Translated text of the article:

Harry Taylor still smiles with his pearly white teeth when he thinks of his love affair with Tina Turner. How young and innocent they were. And how much they enjoyed in, when they were in each other’s arms. Harry Taylor has long been married with someone else. He is father of two children and has been working for more than 29 years at a publicist that publishes books for Sunday schools. Something completely different from the sensational life of Tina Turner.  But Harry is satisfied. His wild years are far behind him. But for Tina, apparently they just started…

“Yes, Harry was my first boyfriend. It was with him that I had sex for the first time. He was 18 and I was 17 years old. I had a crush on him for a long time. He was so handsome, a smooth skin and beautiful white teeth, nice lips and a wonderful body. He looked like a young god! The first time he entered my classroom, I thought: ‘Wooow!’ I was totally crazy about Harry. I dreamed of him. I used to cut his photos from the school newsletter and quietly longed for more…”

42 years ago, Tina Turner was still called Anna Mae Bullock. She lived in Tennessee and was a cheerleader for the basketball team. She danced and cheered whenever her team scored. In the team of Carver High school was Harry Taylor and Tina would always watch whenever he played. One day, Tina asked one of the trainers to ask Harry to come to talk to her. She didn’t dare to do it herself.

The trainer did what was asked of him, Harry came, but Tina was nowhere to be found. “I was so upset”, she recalls, “it was love at first sight and whenever I saw him my heart started beating so fast that I was afraid it would jump from my body. I was still a virgin, but I knew he was the one I wanted to sleep with.”

Tina was in the same school as Harry and after a while they got used to each other. They knew each other so well they went on a date. Longing for her first kiss, Tina made one little mistake. She expected so much of their kiss when his lips approached hers that she kept her lips sealed. Harry replied with surprise in his eyes: “But you don’t know how to kiss!” Tina was embarrassed. Gently he took her face in his hands and Tina melted away in his arms. This was the foundation for the big love game.

One day, Tina and Harry drove with Tina’s older sister Alline to town. Alline found the couple too young to enter with her into the bar. Smoking and Drinking was not allowed at that age. Tina proposed to Harry to go see a movie. Harry replied there weren’t any nice movies playing. Later Tina realized this was part of Harry’s way of seducing her and they stayed behind in the car.

And there it happened, in the back seat of a Plymouth, their lips found eachother once again in a passionate kiss and their hands each other’s bodies. Clothes were slowly removed, and then the big moment was there. Tina remembers it very well and talks about it easily. “I was afraid” Tina recalls. “But Harry was very gentle and cautious. He did it very well. It was a beautiful moment and I have fond memories of it.”

Harry also remembers it very well. “Yes, we both did it for the first time” he laughs. “We had no experience. It was very exciting, we were so curious about how it would be.”

Of course, Tina wasn’t the dynamic show woman she is today. She was rather skinny and thought of herself as very ugly. Harry clearly saw it differently. But, after his love making with Tina, he clearly got the hang of it. Harry went out with lots of other girls and practiced what he had started with Tina. Tina quickly found out Harry was behaving like a Playboy and told him, in tears, the harsh truth. This helped. From now on, Harry kept his hands to himself when it came to other women en appeared to be happy with Tina.

After high school, Harry joined the Air Force. Tina’s parents separated and she moved with her mother to St. Louis. This meant the end of their relationship. Since then, they only saw each other at school reunions, of which you can see the photos here. This brought back old memories, and there was still a little spark, but the real passion had died.

Harry could have never imagined that the first girl he would sleep with would go on to become one of world’s biggest stars. “I knew she was talented” he says with a smile, “but this I would have never expected.” And every time he sees Tina on television, his thoughts wonder back to that evening in the Plymouth, with him and Tina together in the back seat. And then, he pours himself another coffee and asks his wife: “you want a biscuit with that, Mary?”

Oprah: The first love can be the most difficult to get through because you’ve had no experience.

Tina: That’s right. When I think of Harry now, my heart beats faster. He was the most good-looking guy. Everything was in the right place—his eyes, his nose, his mouth. He was a basketball star. Sometimes I’d wear his jacket. It was fainting hot, but because it was his jacket, I wore it. It was magical.

Oprah: I can see that.

Tina: Harry also took my virginity. I don’t regret it. I came home that night and folded the dress I’d been wearing and put it away. The next day, my grandmother was doing spring cleaning and everything got washed. When I came home, she said, “I knew you were running around. You’re gonna get pregnant.” Oh, Oprah! I felt embarrassed. I didn’t know what to say. She didn’t wash the dress. She just left it out. There was this big spot on it. She didn’t let me go dating Harry anymore.

Oprah: Your eyes still light up when you talk about him.

Tina: At the time, I wanted to get married and have children. Harry would have been the one. Years later, after “What’s Love Got to Do with It,” I ran into his son. He came up to me and said, “Harry Taylor is my father.” He looked just like Harry. I thought, “My God, that must have been from another lifetime.”

The full interview can be read online here.