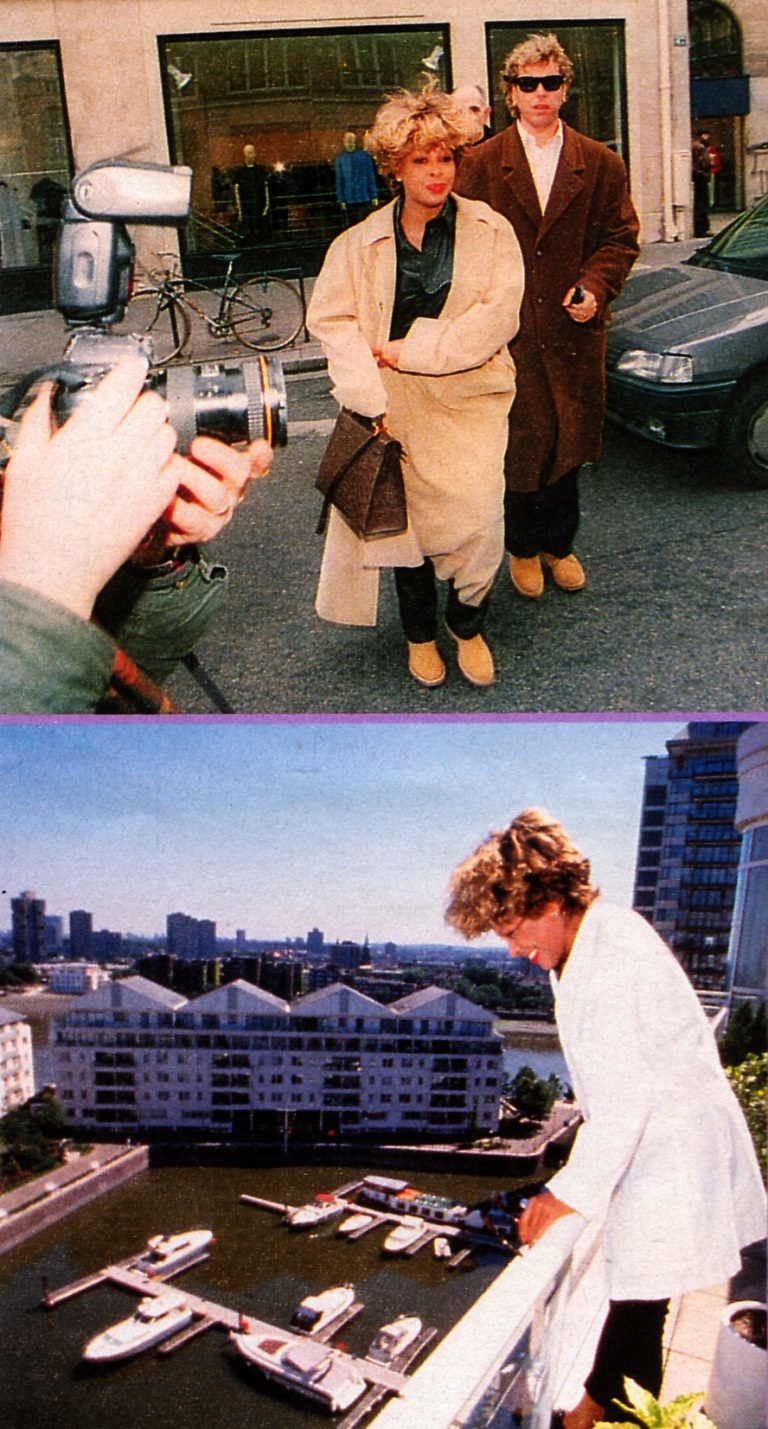 In this article from Belgian gossip magazine from October 17, 1996, Tina Turner’s 1996 Wildest Dreams tour is documented. While the article itself is not very interesting, with many factual errors, some very nice on stage and off stage photos are featured of Tina on the road. Continue reading for the article, including an English translation!

During her recent tour, she gave eleven sold out concert in Flanders, and her cd’s are always selling quickly. Just like in the rest of the world, by the way, because she is a phenomenon. More so: she is a rock legend whose life story is like a book. Tina Turner: in the footsteps of an idol…

“Hi, I’m Tina Turner. Of course that is not my real name, but it just sounds a lot more fun than Ann Mae Bullock. Ike gave me that name when we met each other in St. Louis. A lot has been said and written about Ike, and our life during that time. A movie, a book… all the pain has been written down. That’s why I don’t talk about my past anymore: because it is like looking in a smelly garbage can. I prefer to look ahead. To what I’ve achieved, and what I’m still going to do with my life. And God, I still have so many plans. I know one thing for sure: I only have myself to thank for the life that I’m leading today. I’ve earned my place in heaven and I’m enjoying every second that I’m given.”

Tina Turner. She must be almost 57 years old by now. Strangely enough, her age has always been somewhat of a secret. And actually it doesn’t matter much because on stage Tina is closest to a whirlwind; and tornados are ageless.
Whoever wants to keep up with Tina during her tours has to hurry, because her life resembles a rollercoaster ride. Not that she is partying all the time. No, on the contrary: Tina actually lives a very healthy life.
“I drink very little, I don’t smoke en I’ve always hated drugs”, she says. “They are all things that make people act differently than they really are. I’ve seen friendly, soft men turn into monsters due to alcohol and dope. I don’t need that kind of stuff.”
And about the secret of her apparently endless youth: “I don’t know why, but my figure always stays the same. No matter what I eat. So no cosmetic surgery. Everything is natural.”
Well almost, if we don’t count in Tina’s lion’s manes. Yes, she wears wigs. But that’s a subject that is preferably not talked about. It’s Tina’s weak spot, so nobody mentions it. By the way, there are so many other interesting topics we can discuss.
Shopping for example. Tina loves shopping. “It’s the only hobby she grants herself while touring”, says one of her backup singers. “Especially in cities like Milan, London and Paris it is out of control. Tina lets herself being driven around in a limousine from one shop to the next, to be able to visit as many addresses as possible. For example, she loves shoes and she buys a lot of them. Sometimes we joke about it and say that she will break the world record of Imelda Marcos. But Tina just laughs about it and simply says she’s earned it. The hard way. I think it is her revenge somehow: on her childhood and her past. Because she enjoys unwrapping her clothes just as much as she loves buying them. Her hotel suite will be filled with clothes and shoes and everybody has to give their opinion on what she bought. Us, the tour manager and the musicians that happen to be around. Even the guy delivering the room service. Shopping is like a piece of Christmas for Tina that she takes everywhere.”
Indeed, she never knew a happy Christmas when she was young. With a mother who didn’t want her (“In these days, she would have me removed” says the singer), a stubborn grandmother who had to deal with her alcoholic husband and a father she never got to know very well, young Tina didn’t have much fun. But when the tables turned in the 1980’s, and she made a fortune, one of the first things she did was to buy an apartment. For the mother who always treated her coldly. It’s Tina’s way of coming clean with her past. Her children can also always count on her.
“One could say that I spoil them”, she says on that subject. “Some of them have a real talent, but they don’t use it enough because their mother pays all the bills anyway. But I can’t help it. For me it is not such a bad thing…”

Addicted to the spotlights
But we haven’t talked yet about the things that Tina enjoys most. The things she lives for and can’t give up.
Tina Turner loves singing. Performing and dancing. Her only addiction are the spotlights. Already several times, she announced that she would retire, but she came back on her decision as many times. “As long as we can come up with variations on ‘the ultimate world tour’ I will continue”, she sometimes jokes. “I simply love performing. Apparently I can’t live without it.”
Tina’s reputation as a live-performer is phenomenal. First of all due to her appearance.
“I love to push my audience, to get them going,” she says about that. “The women even more so than the men. I like to party with ‘the girls in the house’ you know. A party to which the men are also invited, of course. I like dressing up for this party on stage. I want to be sexy, not vulgar. I want to entertain, not seduce.”
The Rolling Stones still remember very well the first time they saw Tina Turner at work.
“We were performing in a small, English club. Ike & Tina were also on the bill, but we had never seen them before. Suddenly, backstage was filled with beautiful, black girls. We said: ‘wow, what’s this?!’” Mick Jagger laughs. “We were sitting in the hall and we watched this beautiful, whirling show. We were thinking something like: “Oh that’s how it’s done. This must be show business.”
“Until then, we had only been joking around on stage”, Keith Richards adds. “We just moved a bit with our instruments. But Ike and Tina showed us a real rock show. Mick was taken by the spectacle. From that moment on, he started really dancing on stage. Compared to Tina, he is still a cripple duck, but he got better through the years, haha!”
And with The Stones, we’ve ended up with Tina’s colleagues. The people in the business who admire her and love her. Some of them, like Mick & Co., but also David Bowie and so many others, helped her with her comeback or enjoyed her presence.
“Being on stage with Tina is a special experience”, Keith concludes. “I don’t know how she does it, but when Tina hits the stage, there is electricity in the air. You are sucked into this wind of excitement. The stage is normally sacred to me. Nobody can tell me what to do on stage, or I will punch them. But I follow Tina blindly. She’s a force of nature, and you don’t argue with that.”