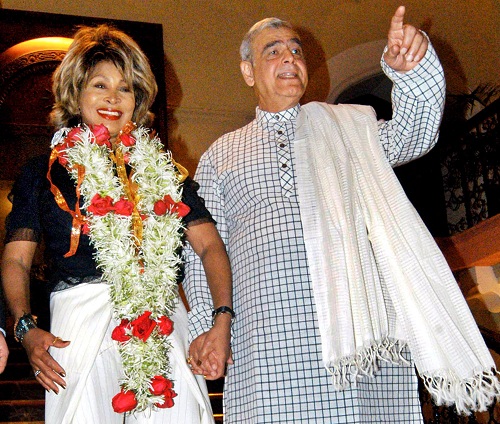 In 2004, it was announced that Tina Turner would get a role in the Merchant Ivory movie The Goddess. Her role would be that of Hindu Goddess Shakti: “the universal feminine energy, which is manifest in Kali, Durga, Mother Mary, Wicca, and each and every woman on the planet”. In preparation for the role, Tina travelled through India, together with director Ismail Merchant. Besides starring in it, Tina was also supposed to contribute some songs in English, Sanskrit and Latin.

Unfortunately, on May 25, 2005, Ismail Merchant passed away while the movie was still in pre-production. The film was never made. In 2010, some rumors appeared that the movie might be completed after all. However, since then it has been quiet: it looks like the project will never see the light of day. Continue reading for a closer look at the movie that could have been…

While Tina has often talked about her ambition to star in motion pictures, her movie career never really took off. Besides some cameo appearances (as the Acid Queen in 1975’s Tommy, and a small part with Arnold Schwarzenegger in Last Action Hero (1993)), Tina’s only real acting job was as Aunty Entity alongside Mel Gibson in Mad Max Beyond Thunderdome (1985). After that movie, Tina showed herself extremely picky about which movies she would like to star in, and even turned down Steven Spielberg’s The Color Purple. While she undertook various visits to Hollywood and talked with producers, she never found her dream role.

Until 2004, when it was confirmed that she would star as Hindu goddess Shakti in the Merchant Ivory production The Goddess, to be directed by Ismail Merchant. While a detailed plot of the movie was never known, Merchant explained it along the following lines:
“It is about a goddess who has the power of the past, present and future. She has a relationship with a painter played by Matthew Modine and tells a story about three lovers that takes place in ancient India. The story shifts between the past, present and future.” (Interview with Ismail Merchant, 2004)

Ismail Merchant invited Tina on a tour of India with him, which took place in February 2004. The voyage included a cruise down the river Ganges, meetings with film producers in Mumbai, and of course some shopping! They also met up with percussionist and composer Zakir Hussain, who would contribute the music for the movie. Tina was supposed to perform a few songs, in English, Sanskrit and Latin! Apparently, (some of) the songs have actually been recorded, but until now have never surfaced.

Tina Turner on preparing the role (2004):
“I had not worked for four years. And then I was told about a year ago that Merchant Ivory were doing a film which had something to do with legends and goddesses. I said, yes, yes, yes. I was kind of moving round the subject. It was about Shakti and I said, yes, that sounds good. It sounded very visual and physical. It excited me, and now I am excited about being a dancer. I want to work on the training for this. I have been thinking about this film. I want to breathe in the Spiritual. I want to believe in all the myths and legends. I was brought up with all that and feel that I can step into that character. I had not given that much thought earlier to the legends of India, to the gods here. I have smaller statues at home though… Now that I am here I have to come up with another concept. India is giving me another perception. To step into the role, to prepare the self for which I need stronger, focused meditation.”

However, not everybody was enthusiastic about the movie. A few Hindu organizations in the United Kingdom were outraged that Ismail Merchant had cast Tina Turner for the part of Shakti. They saw her as inappropriate for the role:

“We have no quarrel with Ms Turner as such, but because of her reputation as a ‘sex icon’ it is improper to cast her.” (The Telegraph, March 2004)

Merchant immediately defended his choice with a publication on his website:
“Tina Turner is one of the great artists of our time and has been a practicing Buddhist for the last twenty years. She has thrown herself whole-heartedly into the project. In her recent trip to India, she said that she felt she had come home. An artist of such international stature should be welcomed coming to India, learning our traditions in order to portray them so that the whole world may know the glory of our music, dance, and spiritual ethos.” (website Merchant Ivory Productions)

After the controversy surrounding the casting of Tina, it became quiet, with Ismail Merchant still working on his other productions, and Tina promoting her 2004 greatest hits compilation All The Best. In May 2005, the sad news was announced that Ismail Merchant had passed away at the age of 68. Without a director, who was so intensively involved in all aspects of the movie, the project was put on hold.

However, in August 2010, the movie’s composer Zakir Hussain announced in an interview that they were talking about continuing the movie. (Hindustan Times, August 2010) It was unclear at that moment if Tina would be involved again. Unfortunately, since that interview, no further developments have been reported. Thus, it looks like the movie will never be made. Hopefully, the recordings that Tina had already done for the movie will surface some time in the future!

14 Replies to “From Rock Queen to Hindu Goddess”