New excerpts from ‘My Love Story’, Tina Turner’s new biography have been published again by English newspaper ‘The Daily Mail’ In this part of the book, the retired Rock Star evokes the sudden and recent passing of her eldest son Craig…

On her right wrist Tina Turner wears three Cartier love bangles that grab at the autumn sun in the garden of her Swiss château. They’re ‘glued on’, she says, and together they tell the story of her extraordinary life. First there’s the gold one she bought when she made it big in her 40s. Next there’s a platinum bangle, a gift from her then boyfriend Erwin because he didn’t want her wearing a love token she’d had to buy for herself. The third, in rose gold, was his gift to her as they prepared to get married more than 25 years later.

Tina wore Armani for their wedding in 2013 and today she’s in it again, a diaphanous black and cream two-piece which ghosts across well-kept curves and doesn’t even try to hide a foxily dark lace bra. The smudgy grey eyeliner matches her nails, a deep storm-sky grey. Her hair, glossy, a little bit brown and a little bit blonde, is a wig, ‘an everyday one’. She has half a dozen, all identical. ‘I like looking the same, as if it’s my own hair. Not like Cher,’ she laughs.

But it’s clear that, despite this nonchalant glamour – ‘Am I presentable here?’ – Tina is in frail health, having suffered a stroke, cancer and kidney failure in the past five years. There is also her age: she celebrates her 80th birthday next year, a landmark unimaginable to the millions who remember her as she once was, all legs, fringe and shimmy. 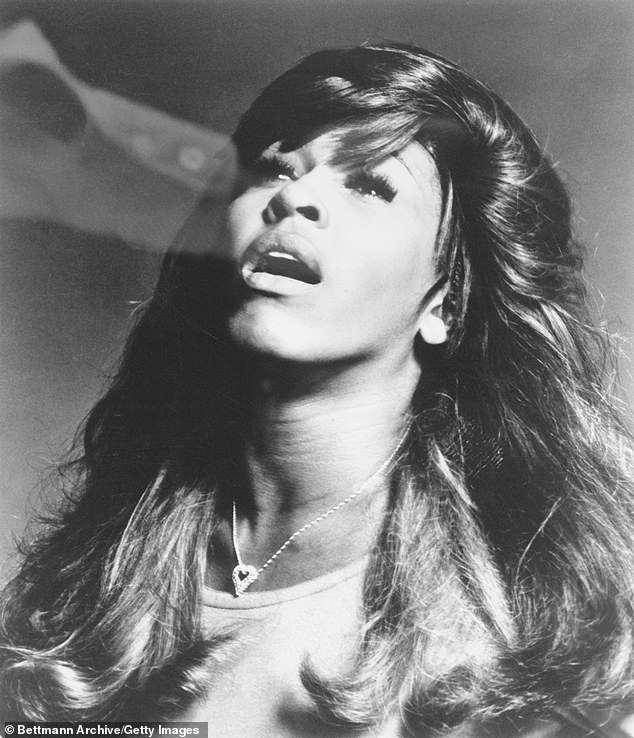 Illness has kept her out of the public eye but now she has an autobiography – My Love Story – to launch and she is about to do that superstar thing of ‘bringing it’ to her audience. So she sits down and suddenly, like the kind of comeback concert for which you could never hope to bag a ticket, it’s showtime. From Ike to Erwin (husbands one and two); her beginnings in Nutbush, Tennessee, and her ‘now’ in Zurich; sex, celibacy and assisted dying, it’s all up for discussion. As are hairpieces and hand-stitched shoes and even the way leather dresses are great because they don’t show the sweat on stage.

The only time she stumbles is when I ask about Craig, her son who took his own life this July. She has barely begun to answer when she bursts into tears which she wipes from her cheeks with her palms open.

We start by talking about that amazing body since it was, along with her voice, what made her famous. Added to the stroke, the cancer and the ruined kidneys, she has also suffered attacks of crippling vertigo and fell over in this very garden a few weeks ago, cracking her pelvis in two places. ‘I have trouble keeping the list straight,’ she deadpans. She wore her body out? ‘Yeah, I did absolutely!’ she cries. ‘I like that. I wore my body out.’

She’s alive and off dialysis only because Erwin, who is 16 years her junior, donated a kidney to her. ‘We call it “the Baby” because it’s like me being pregnant – it’s a part of him, kind of a baby from Erwin! It’s over here somewhere,’ she points to her lower right abdomen. ‘So I have three kidneys and he only has one.’

Erwin is lying, casual in jeans and a black T-shirt, on a sun lounger nearby. ‘And I feel it,’ he teases.

It was a huge decision for her, though: Tina is a member of assisted suicide organisation Exit and had no qualms about dying. ‘I do not want to sit and suffer. I thought, “This is my time,” and it was OK with me. I felt fine with it. I told my doctors too. There was nothing else I wanted to do, nowhere I wanted to go. I decided I would rather just leave the planet. 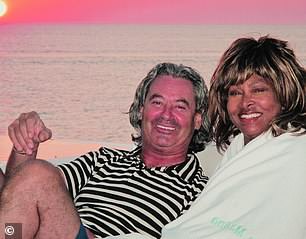 ‘In Buddhism [raised a Baptist, she’s been a Buddhist for more than 40 years] you accept death. When my body closed, I felt it had done its job. But my husband said, “No, no, no, Tina, I do not want another woman in my life. I am not ready to deal with that.”’

In other words, she chose life over death as the ultimate act of love for Erwin, which is rather funny when you hear that the first time he proposed, on the eve of her 50th birthday, she turned him down. ‘I told him I don’t want marriage: I own a cat.’

She holds out her wedding finger to prove she conceded defeat on that issue too. She wears two bands: the one he gave her on ‘the day’ and another which is half of a pair she had made soon after by Cartier, so they could have matching rings.

They’ve been together since they met in 1985 when Erwin was a senior executive with her record label EMI in Germany. It was a coup de foudre for Tina but she still can’t believe he fell for her in the same instant. ‘Issey Miyake sweater, leather jeans – rock ’n’ roll stuff – and my hair was big, big, big. That was my style, what people expected to see, but I’m not sure it was my best moment.’

Which brings us neatly to the discrepancy between how the world saw Tina Turner and how she saw herself. David Bowie, who one imagines is an authority on these things, described her stage as the ‘hottest place in the universe’ after they virtually set fire to it duetting on his song ‘Tonight’.

‘I never liked that image,’ she says. ‘If people thought I was sexy, then it was their perception of me from energy and the dresses and the dancing. On stage I worked. I danced, I sang, I didn’t perform sexy, I didn’t gyrate.

‘I have never been a sex-driven person, it has never been a priority for me. After my first marriage I didn’t have many men in my life, sex was not important. I didn’t sleep around. I was celibate for a year at a time until I met Erwin.’

‘Fishnets are practical, they don’t run, and leather doesn’t show the perspiration on stage or wrinkle. I only wore a mini because everyone knows you can’t dance in a dress past your knee.’ She doesn’t even know how long her inside leg is. ‘Ask Giorgio.’ She means Armani. ‘He will know.’

She is sounding rather proper and goes on to say that she doesn’t approve of the amount of flesh on show in the music industry today. ‘I think these days women are not wearing clothes, they are undressing as much as possible. Maybe the men are interested but I suspect it turns other women off.’

Other things she dislikes are twerking and singers with ‘girly voices’, the kind diametrically opposed to her own: ‘I have a heavy voice, I mean, it’s dark, not up there,’ she trills to show what she means, ‘but looooow’ and she sing-speaks the opening line to ‘Private Dancer’: ‘All the men come in these places…’ to show me. Hearing her, so close, so unmistakably Tina Turner, makes the hairs on my forearm stand up despite the fact I’m the one sitting in the sun.

Her powerful interpretation of ‘Private Dancer’ took the 1984 album of the same name to global sales of 20 million and won her four Grammys. It also bisected her career. Before it she had been one half of Ike and Tina Turner, the girl from Nutbush who sang alongside the St Louis King of Rhythm. After it she was a solo megastar, a multimillionaire, a crusader for her gender and her colour and starting over again in your 40s.

The song is, of course, about prostitution. ‘I never had to stoop to prostitution in my life but I think most of us have been in situations where we had to sell ourselves, one way or another.’ She means she stayed in her first marriage long after she should have left.

Ike Turner beat her, took all her money, forced her to have sex, ‘a kind of rape’, and to sing when she was sick, exhausted and pregnant. The day he married her in a dusty civil ceremony in Tijuana, Mexico, in 1962 he celebrated by taking her to a whorehouse to watch a live sex show.

She divorced Ike in 1978, taking only her stage name which he had trademarked (her real name is Anna Mae Bullock). Sadly the toxic legacy of those days was in evidence this summer when Craig killed himself. (Tina raised four boys: Craig, whose father was a saxophonist and born when she was just 18, a son by Ike and his two boys by another relationship.)

‘I think Craig grew up lonely, I think he missed his mother a lot. I was away, always away, touring, in the early times and I blame Ike for not being able to be the mother I would have been. I think I was as good a mother as I could be under the circumstances. I believe I made it up to Craig somehow, later. I don’t feel bad about it because that was my reality then. I had no options.’

Craig shot himself with a gun which had belonged to Tina’s mother, Muh, a woman with whom she had a tricky relationship all her life. What does she think about that? Suddenly steely: ‘That it was my mum’s gun, is what I think. It just means when she died, Craig took it, bought the bullets and planned his own death really well. He wanted to go. What I don’t know is why he would take his life so dramatically, that’s the mystery.’

I ask how she’s coping with the aftermath: ‘I handle it with acceptance. I remember all the moments when he visited me here. Like all boys, he was a little bit of a pest, but he was still my son! I remember the good things and the bad.’

She sounds unusually emotionally self-sufficient, just as she does when she speaks about Muh and her own damaged, unloved childhood. What’s far more visible, and audible, is her enduring love for Erwin: romance, friendship, care and fun still thrum between them. I think he’s her truest family.

We have been talking at a vast stone table shaded by fronds of ivy and emerald ferns. It’s an exquisite spot gazing out over the waters of Lake Zurich. Tina only came here because Erwin was promoted to be the head of EMI in Switzerland – ‘I was a good frau!’ – but you can see why she stayed.

I ask her if she could wind back time and change one thing what it would be? ‘Nothing,’ she says. ‘It was my karma.’ And anyway, she’s looking forward to being 80. Does it feel weird saying that? ‘No. Because I always wondered how will I look, how will I be, when I am that age.’

She rises and as I watch her go I think of one of her lesser known songs, ‘Something Beautiful Remains’. It wasn’t a chart topper on either side of the Atlantic but she loved it enough to sing it for the final curtain call on her Wildest Dreams tour. Unlike most of us, Tina Turner got to live hers, and now as she faces her own autumn its lyrics have never felt more moving: ‘For every light that fades, something beautiful remains.’